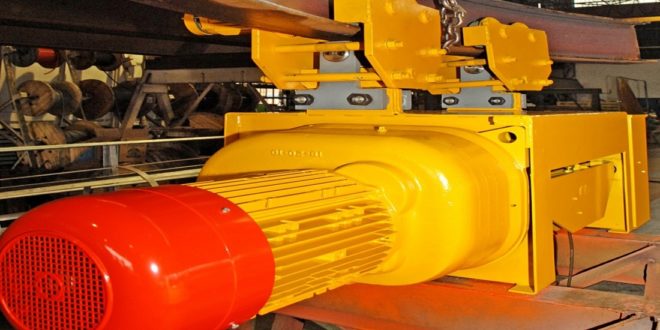 Minergy is urging SA to reconsider its decision on the Waterberg rail project.

Condra has completed manufacture of eight explosion-proof, high-lift hoists – four of them articulated – for Tenova Bateman.

All are custom-built, two-speed machines that utilise the modularity of Condra’s K‑Series to deliver performance capabilities precisely tailored to the individual requirements of each application.

After commissioning at Kusile Power Station, the eight machines will carry out installation and maintenance work on coal conveyors. They will further boost Condra’s already substantial presence at Kusile, where the majority of overhead cranes and hoists have been supplied by this company.

Loads of between one and seven tons will be managed by fixed lifting speeds ranging from 1,25 to 12 metres per minute, and by lift heights of between 10 metres and 41 metres.

Noteworthy among the machine features is the articulation on four of them, allowing travel around curves away from the line of conveyor movement. Also unusual are the higher than normal lift heights on six of the units: 17 metres (two machines), 18.5, 21, 32, and 41 metres.

A Condra spokesman explained that even the 10 and 11,5-metre lift heights of the remaining two hoists can be looked upon as high-lift.

“Hoists with this sort of lift height are not off-the-shelf deliveries for most crane companies, but we can offer and deliver a high-lift capability quite quickly because of the modularity of the K-Series,” he said.

“We can adapt the K-Series to an extremely wide range of requirements.”

Condra is generally acknowledged as sub-Saharan Africa’s leader in high-lift cranes and hoists, a reputation which probably worked in favour of securing the Tenova Bateman order. Local manufacture would also have been a factor; there is increasing awareness that local sourcing will be one of the anchors upon which economic recovery in South Africa will rely.

The company’s solid reputation in high-lift applications rests largely on the durability and reliability of its K-Series hoist range.

Manufactured since 1972 and installed worldwide under a wide variety of operating conditions, the K-Series has proved particularly dependable under the conditions of increased mechanical strain associated with high lift.

The installed base includes lift heights as high as 150 metres.

The K-Series is produced in three configurations: foot-mounted, monorail and double-rail crab. Lifting and reeving arrangements include centre-lift.

Condra uses silumin rotor cores to enhance K-Series motor-starting torque in the high-lift role, and offers optional variable speed control on the drives to enable precise load positioning even on lifts of 100 metres and more.

The modular design of the K-Series allows rapid modification to specific high-lift application requirements (including lift speeds as quick as 1 metre per second – fifteen times faster than the 4 metres per minute found in many standard applications), resulting in delivery times that are usually the shortest available.

Standard hoist speeds go up to 18 metres per minute.

After delivery, the hoists for Tenova Bateman will be installed in the coal silos and at various maintenance stations along Kusile’s conveyor route, where they will help with the installation, removal and maintenance of motors, gearboxes, rollers, pulleys and the conveyors themselves.

All have been flame-proofed to IP65 standard, and explosion-proofed to Class II Zone 21 specification, countering the combustible nature of coal dust which can explode if sparked. Among other things, the proofing involved fitting special gland seals between the motors and the hoists themselves, and sealing all covers and panels.

Articulated crawls have been fitted with modified cross-heads and assemblies that allow them to negotiate bends in the supporting I‑beams, which follow curved routes to take the hoists and their loads away from the conveyor line. Brass bushes on the articulation prevent any possibility of sparking.

During manufacture, all welds were inspected at every stage, and all eight machines were completed with a special anti-corrosive paint specification.