Botswana and De Beers are working out the “finer” details of a new diamond-sales pact and the southern African nation’s government is confident a deal will be struck, President Mokgweetsi Masisi said.

An initial ten-year agreement governing terms for the sale of diamonds produced by Debswana Diamond Co — a joint venture between the two — and auctioned through the De Beers system lapsed in December 2020 and was extended to June 2022 due to the disruption of the pandemic. The two agreed last month to extend negotiations on new terms to June 2023.

“We are just fine-tuning, but we will strike a deal,” Masisi said in an interview in Marrakech, Morocco. “It is imperative that a deal gets struck because it is in the interests of both parties.”

Botswana’s mines contribute about two-thirds of De Beers’ annual rough-diamond production. Botswana now wants to leverage its control of the diamond reserves to wring more concessions from one of the world’s top diamond suppliers.

That doesn’t mean the government wants to break ties with De Beers, Masisi said. The government is seeking adjustments in the terms of the joint venture, and more value added to the stones in Botswana through local processing to help boost job creation and economic growth, he said.

“It’s a really valued addition, so the resources you have been mining, we want to use our knowledge base to yield greater returns,” Masisi said. “That’s the conversation De Beers and ourselves are talking about.”

According to President Mokgweetsi Masisi, De Beers and Botswana are finalizing the “finer” points of a new diamond sales agreement, and the administration of the southern African country is optimistic that a deal will be reached.

Due to the interruption caused by the pandemic, a ten-year deal that set the terms for the sale of diamonds produced by Debswana Diamond Co, a joint venture between the two, and auctioned through the De Beers system, expired in December 2020 and was extended to June 2022.

The two decided to continue talks on new terms until June 2023 last month. 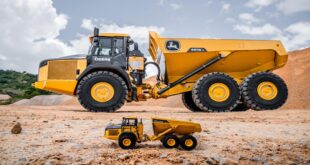 Designed with the demands of today’s job site in mind, John Deere has introduced the …