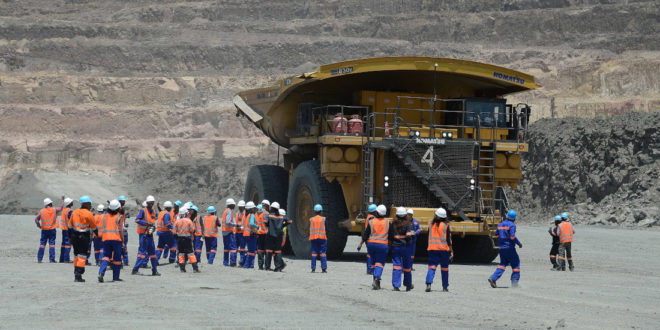 Windhoek/Gaborone – The mining sector in the region is facing the severest stress witnessed in a long time which will see thousands of workers losing their jobs and a situation that could strain the revenue streams of Southern African Development Community (SADC) member states, whose projected economic growth for the year depends on good mining output and better commodity prices.

An analyst with Africa Risk Consulting, Mark Sorbara observes that as long as the current economic downturn persists, governments face tough budgetary decisions of how to extract more value for money from oil, gas and mining companies and stimulate employment, without discouraging investment.

He said labour issues are the key concern for host governments as mining companies retrench thousands of workers to strengthen their balance sheets.

“Kumba Iron Ore in South Africa announced 4000 job losses this week. Anglo American has announced 85,000 worldwide. This will likely to strain relations between governments and mining companies and negatively impact the ability of the industry to work with host governments to create a cooperative forward-looking policy environment that can set the stage for broad-based benefits when the commodity cycle begins returns from its depressed price environment,” Sorbara said.

He said despite the potential for increasingly tense government – investor relations, Africa’s mineral reserves still have significant growth potential and the current down cycle provides another opportunity to get in on the ground floor. The sub-Saharan Africa region is facing severe shocks associated with the steep decline in commodity prices and tightening global financial conditions.

Botswana has already disclosed that thousands of its workers in the mining sectors will lose their jobs in the next coming few months. Botswana’s Minister of Minerals, Energy and Water Resources, Kitso Mokaila told Parliament this week that the volatile commodity market has impacted negatively on the current employment levels and Government commitment to employment creation in the mining industry.

Employees at Botswana’s Diamond Trading Company Botswana (DTCB) employees are also said to be uncertain of their future as the company is undergoing a restructuring exercise which is expected to shed an undisclosed number of jobs. Diamond prices have dropped about 12 per cent over the past five years. This has been attributed to falling demand in China.

The state-owned BCL, Botswana’s biggest copper miner, is expected to cut as many as 2,000 of its 6,000 workforce as it streamlines operations in the face of weak copper prices, currently at six-year lows. London-listed Gem Diamond expects diamond production at its Ghaghoo mine in central Botswana to fall by more than half this year due to depressed demand for diamonds globally. It may have to lay off more than two-thirds of its workforce as it restructures to cope with the weak market.

The pronouncements are on the back of the February statement issued by the Mining Industry Association of Southern Africa (MIASA) which is an association of Chambers of Mines in SADC has warned of more job losses in southern Africa’s mining sector, saying the Southern African Development Community (SADC) lost approximately 70 000 jobs across all commodities.

“Considering a multiplier effect of seven, this translates to total jobs lost amounting to 490 000. This means up to five million people have been deprived of their daily subsistence considering that each employee supports between seven to 10 dependants. To make matters worse, a further 50 000 employees face the risk of losing their jobs if something drastic is not done urgently.”

MIASA had highlighted the need for policy consistency by governments to help the mining industry in the SADC region survive. MIASA is a regional mining body representing chambers of mines from Botswana, Democratic Republic of Congo, Madagascar, Namibia, South Africa, Tanzania, Zambia and Zimbabwe.

Mokaila said beyond the job losses, the current situation has also constrained mineral exploration expenditure and activities on the ground thus compromising the ability to make new mineral findings.

“As a ministry, we direct our efforts towards avoiding or minimising job losses in adverse economic situation such as the current one. Where job losses are inevitable other stakeholder Ministries become the focal points of government interventions,” he said.

Zimbabwe has also not been spared by the falling international prices of the diamond mineral in Marange, located some 300km at the eastern border-post of Manicaland province near Mozambique, resulting in several companies reducing costs and streamlining non-core business units.

Diamond mining has stalled after the government ordered all the companies operating in Marange off the fields after they defied a policy directive to merge into a single company called the Zimbabwe Consolidated Diamond Company (ZCDC).

The government argues this is to ensure transparency, efficiency and accountability, citing the Debswana operations in neighbouring Botswana. But the mining companies, among them Mbada Diamonds and the Chinese owned Anjin, have taken the government to court in what could turn out to be a long-drawn-out legal wrangle.

Media reports also indicate that the Zimbabwe Government was forced to railroad the Labour Amendment Bill through Parliament after a recent Supreme Court ruling that allowed employers to fire workers on three months’ notice sparked a tsunami of job losses that saw more than 20 000 people losing jobs.

In Zambia, it is reported that the Zambian government may consider introducing finance-aiding initiatives to help reduce mining job losses.

This follows an announcement by Anglo-Swiss mining company that it is suspending operations at its Katanga copper mine in the Democratic Republic of Congo (DRC) and its Mopani copper mine in Zambia for 18 months to undertake upgrade works aimed at lowering operating costs. CNMC Luanshya Copper Mines also recently stated it would suspend operations at its Baluba mine in Zambia.

However, some member states seem to have sound policies in place that will mitigate job losses predicted by MIASA.

Namibian Chamber of Mines of Namibia chief executive officer Veston Malango last week said despite depressed global commodity prices that have adversely affected the world’s mining industry, the Namibian mining industry has created more jobs than it has lost. “We are engaging government to discuss and resolve such challenges to sustain mining sector growth in the future,” he said. Still, he credited a sound regulatory regime in Namibia for keeping investors interested despite trying times.

“The stable political climate in Namibia and the clear framework set out by the government have made Namibia the number one mining investment destination on the continent for two years running,” Malango further said.

Malango was speaking at the launch of Namibia’s Mining Expo and Conference that will this year take place on April 27 and 28 in Windhoek. Botswana would also on March 14 -17 hosts the Botswana Mining Conference Indaba dubbed, “Diamonds still Sparkling 2016.”

The mining conference is set to deliberate on geology and exploration, mine expansion projects, mining, metallurgical and beneficiation technology, rough diamond sales and marketing, cutting and polishing, financial services and industry analysis, industry governance and legislation update as well as mine specific case studies.

The International Monetary Fund (IMF) expects most countries in sub-Saharan Africa will see a gradual pickup in growth, but with lower commodity prices, to rates that are lower than those seen over the past decade.

“This mainly reflects the continued adjustment to lower commodity prices and higher borrowing costs, which are weighing heavily on some of the region’s largest economies (Angola, Nigeria, and South Africa) as well as several smaller commodity exporters,” said IMF.

Investment managers at Imara Africa Securities says growth in the Sub-Saharan Africa region is expected to accelerate in 2016, even though the rebound will likely be moderate as the main threats to growth are not projected to wane soon.

DRC is expected to be amongst the best performers this year, with GDP growth rates at or above 7.0%. At the other end of the spectrum, South Africa is likely to be the worst performer, followed by Angola and Botswana.

Tanzania’s economic output is expected to rise at 7,1 per cent in 2016 /17 driven in part by rising consumption from consumers, increased infrastructure spend and growing exports. Imara says the performance of the Zimbabwe Stock Exchange in 2016 to depend on the authorities addressing the macroeconomic fundamentals.