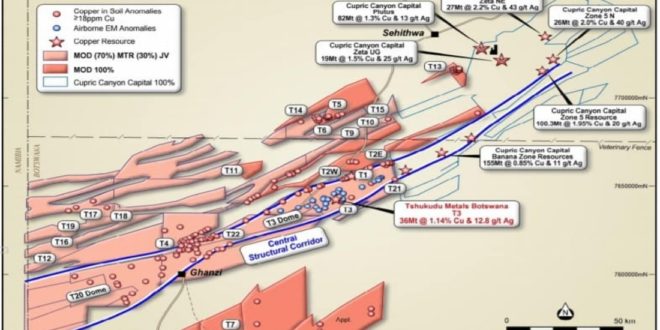 It has appointed Lycopodium to provide engineering and procurement services for the development.

Lycopodium will undertake the detailed multidisciplinary engineering design and procurement services for the 3.2-million-tonne-a-year copper concentrate treatment plant and the associated non-process infrastructure. The project, being overseen by Tshukudu Metals Botswana, a wholly-owned subsidiary of Sandfire Resources, will be delivered by Lycopodium subsidiary ADP Kukama, which operates from Botswana, offering locally based services to the country. Works will commence immediately.

Sandfire MD and CEO Karl Simich says the decision to proceed with the investment in a new, long-life copper production hub in Botswana marked a pivotal moment in the company’s transformation into a global, diversified and sustainable mining company.

“Today we have given the green light to the development of a new, long-life copper operation based on the T3 open pit, which we envisage will become the core of our Motheo Production Hub – a new copper production hub in the central portion of the world-class Kalahari Copperbelt, where we have a dominant 26 645 km2 ground-holding in Botswana and Namibia.

“This is, in effect, the dawn of a new global copper province – as evidenced by the scale of the new underground mining operation currently being constructed immediately to the north-east of our project by Cupric Canyon Capital at its Khoemacau project,” he comments.

The base case operation will generate an estimated life-of-mine revenue of $2.45-billion and earnings before interest, taxes, depreciation and amortisation of $987-million.

The project has an estimated past-tax net present value of $206-million, an internal rate of return of 21% and a payback period of 3.8 years from the start of production.

“The T3 base case is robust in itself, as demonstrated by the key metrics . . . but the bigger picture for us is the key growth steps that we are confident will be taken soon after we start production in early 2023.

“The recent A4 discovery, for which we have today announced a maiden inferred resource containing 100 000 t of copper at an average grade of 1.5% copper, is the most immediate and obvious opportunity within the T3 expansion area,” says Simich.

“We will advance this maiden A4 mineral resource quickly, with drilling already underway to upgrade it to indicated status and work beginning on a prefeasibility study aimed at integrating it as a source of satellite ore feed for an expanded Motheo Production Hub.

“We are making a significant upfront investment in several key infrastructure items, including the primary crusher and the flotation cells, which will allow us to up-scale the project quickly to 5.2-million tonnes a year, with relatively modest incremental capital investment.

“We anticipate being in a position to commit to that expansion during project construction, with the overall goal of ramping up to the higher production rate shortly after commissioning,” says Simich.