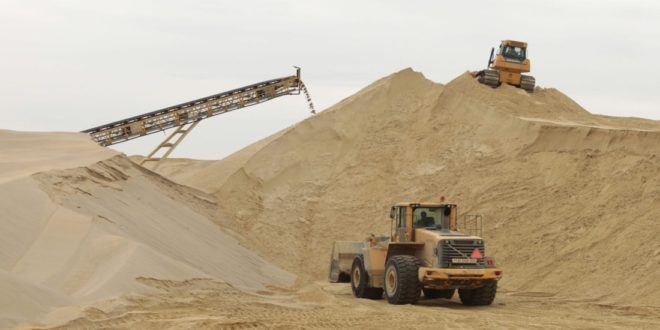 Moshupa Police Commander, Superintendent David Ramoseki said the ever-increasing illegal sand mining in Moshupa and surrounding villages was a great concern and disclosed that police were determined to eliminate the crime.

Supt Ramoseki said recently about 16 cases were registered while a tipper truck and a 40 cubic-metre truck had been seized.

The truck was now awaiting road inspection while the other required payment of towing fees, as the driver fled the scene, prompting the police to engage a private towing truck, he said.

He said the seized sand had been used by the council and the district administration in the construction of hand basin bays and toilets at schools.

Supt Ramoseki said police were currently working with the villages’ leadership on the issue and had also identified whistle blowers to assist in fighting the crime.

He, therefore, encouraged members of the community to report any trucks spotted loading sand, revealing that the crimes happened at night.

The contraventions include failure to wear face masks in public, travelling without a permit, operating taxis during lockdown and brewing of traditional alcohol with most of the culprits being young people.

He, therefore, appealed to parents to assist in restraining and encouraging their children to stay home for the sake of their health and that of the whole nation.

He explained that the movement that was currently permitted was for people to go to the nearest shops to purchase groceries.

He urged members of the community to continue adhering to COVID-19 health protocols including wearing face masks, washing hands regularly with soap and clean water and practising social distancing.

Supt Ramoseki noted that police had been deployed in the village and surrounding areas to ensure compliance.

The only way coronavirus could be defeated was for all to comply with the set regulations, he said.

He also expressed concern about illegal brewing of traditional alcoholic drinks as the activity was on the rise, with women being the culprits.

Supt Ramoseki said as a way of deterring people from brewing traditional beers, fines had been increased from P200 to P2000.

To speed up the processing of cases, arrangements had been with the customary court to try those who fail to pay admission of guilt fines, even during the lockdown, he said.

Supt Ramoseki, however, said since lockdown, a decline in crime in the area had been realized.