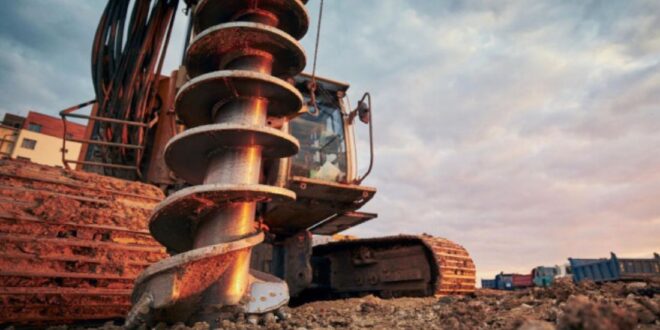 Kanye Resources, a Botswana joint venture (JV) in which Power Metal and Kavango each own a 50 per cent stake, owns Ditau. The operator is Kavango.

Nine of the 12 targets found are clear ring structures that Kanye believes could be carbonatites with REE mineralisation potential.

Kanye will start a diamond drilling campaign which will include up to six deep drill holes (up to 2 400 m estimated in total) targeting three of the highest priority targets identified to date.

A diamond drill rig is being mobilised to the first drill location and drilling is expected to begin within the next few weeks. Mindea Exploration and Drilling Services will conduct the drilling.

While the drilling campaign is primarily targeting REE mineralisation hosted within interpreted carbonatites or felsic intrusives, the geophysical targets could also be related to layered mafic intrusive systems, which are considered by Kanye to be prospective for nickel, copper and platinum group element (PGE) mineralisation.

The target depth horizons at all targets are less than 400 m for each drill hole, and the estimated Kalahari sand cover is between 60 m and 120 m thick based on estimates from the recently completed audio-frequency magnetotelluric (AMT) surveys at Ditau.

The drill programme may be revised as it progresses. While the nominal targets are carbonatites, other mineralisation styles may also be intersected within the ring structures. The programme has been designed with this flexibility in mind.

The 12 airborne magnetic targets identified at Ditau are not known to have been tested for either REEs, base or precious metals mineralisation historically.

Kanye has identified these structures, which range in size from 1 km to 20 km in diameter, using geophysical techniques which are more advanced than that available to previous operators, the company says.

It adds that it has employed airborne magnetic, ground magnetic, gravity and AMT surveys at Ditau and the results from these surveys have allowed for precise drill targeting.

“It is imperative for the world to find new sources of REEs in secure and stable mining jurisdictions. At Ditau, several years of preparatory work utilising modern remote sensing and various geophysical techniques have culminated in multiple high-priority exploration targets which we believe offer the potential for discoveries of rare-earth element mineralisation within mining-friendly Botswana.

“For Power Metal and Kavango to jointly launch another drill programme in Botswana demonstrates our confidence in the geological prospectivity across our project interests in-country, and we look forward to the progression of this important drilling programme at Ditau and its findings,” comments Power Metal CEO, Paul Johnson.

Kavango CEO Ben Turney says the primary objective of the drilling is to confirm whether one or more of the ring structures or intrusives identified are carbonatites with potential for REEs, or mafic intrusives potentially hosting base or precious metals.

“Drill testing the ring structure targets should be relatively straightforward. While the geophysical signatures are complex and varied, confirming the presence of carbonatite/mafic bodies would be the first step toward defining the potential for REE and base/precious metals mineralisation.

“We will release more results from this in the coming weeks, as we progress through the drill campaign,” he adds.

Share
Previous Kavango lays out plans ahead Kalahari Key Mineral Exploration Proprietary acquisition
Next Time for Botswana to pivot to other resources?