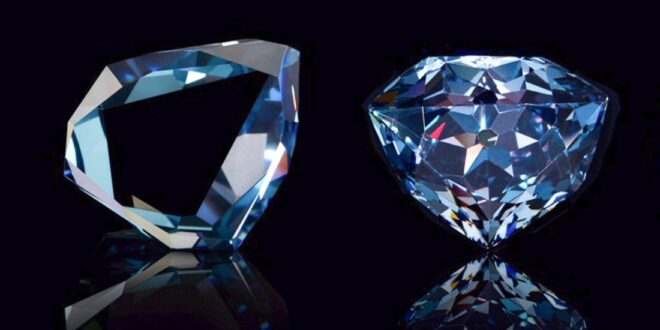 A virtually flawless 20-carat blue diamond from Botswana is featured in a new exhibit at the American Museum of Natural History.

The Okavango Blue Diamond, together with hundreds of unpolished natural diamonds, was exhibited at the Mignone Halls of Gems and Minerals on Wednesday as part of a new exhibit highlighting Botswana’s diamond mining history.

A rarity amongst the violent and colonialist history of diamond mining, museum officials said the four largest diamond mines in Botswana were developed in close collaboration with tribal leaders after the country attained independence from the United Kingdom in 1966. The country is now the second-largest producer of natural diamonds in the world, according to the AMNH.

The Blue Diamond is on loan from the Okavango Diamond Company, which is owned by the government of Botswana.

“You see the Okavango Blue, has a story to tell, it has people learning and understanding how you arrived at that type of diamond,” Masire said. “It is responsible sourcing, responsible mining, that makes a difference.”

The gem’s distinctive blue comes from its chemical composition: “Blue diamonds are extremely rare — and those of this size, even more so,” said George Harlow, curator of the Mignone Halls of Gems and Minerals, in a press release. “While most diamonds contain small amounts of nitrogen, blue diamond’s contain lesser amounts of nitrogen, and critically, more boron atoms in their crystal structure, resulting in the captivating hue.”